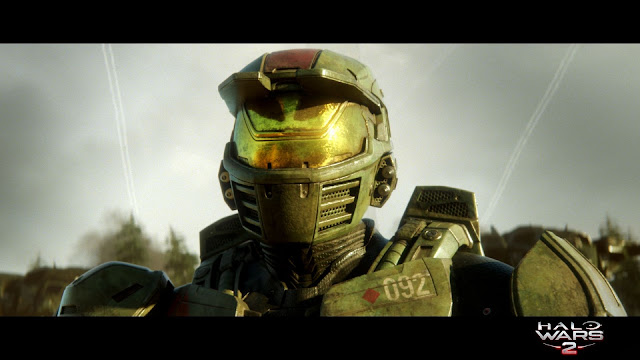 Real-time strategy returns to consoles, with the makers of Total War offering up an exciting range of campaign and multiplayer action.

According to Halo overseers 343 Industries, a sequel to Halo Wars is their most requested Halo game ever. We find that hard to believe though, considering we’ve never met anyone who had any particularly strong feelings about the original. Because despite its innovations in making real-time strategy controls work on a console the game itself was rather dry and uninteresting. Released way back in 2009, the original was by the now defunct Ensemble Studios – creators of Age Of Empires. This new game though is by Creative Assembly, creators of Total War. And it’s a lot more fun.
It may seem hard to believe now, but back in the late ‘90s and early 2000s real-time strategy (RTS) games were amongst the most popular style of game on the PC. But the genre never found a way to evolve beyond the template laid down by Command & Conquer and Starcraft, and today the genre is all but dead. And because the gameplay was designed with a keyboard and mouse in mind, and benefited from a high resolution display, it never worked well on a console. Although the first Halo Wars was key in proving that a joypad alone was fine if you put enough thought into the design.
We were big fans of the genre back in its heyday, but so rarely do we get to play the games nowadays that when we are confronted by a new one (such as Sega’s Warhammer 40,000: Dawn Of War III) we find our skills to be embarrassingly rusty. But thankfully Halo Wars 2 is extremely easy to pick up, and the controls are both intuitive and impressively nuanced.


If you don’t generally play strategy games then the usual assumption is that they’re complicated and slow. But with a RTS that’s just not true. The basic concept couldn’t be simpler: you control a small army of soldiers, vehicles, and aircraft and all you have to do to control them is select them and tell them where to move to.
When it comes to using a joypad selecting is the hardest part of that equation, since most of the time you want to select multiple units at once. But Halo Wars 2 makes it very easy with the ability to create an expanding circular tool that selects everything it touches. Although even simpler than that is tapping a bumper to select everything on screen or double tapping to select every friendly unit on the map.
If you want to get more detailed you can select every unit of a specific type or create pre-set groups that you can switch between with a single button press. That, admittedly, is when things get a little more tricky but we were very impressed that Halo Wars 2 had the option. Especially as you can still play the whole game with essentially just two buttons if you want. 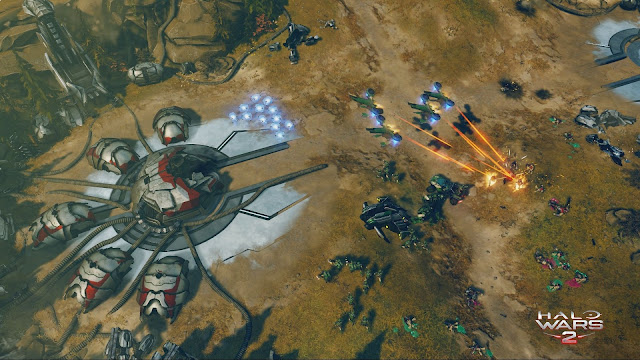 The game’s story takes place just after Halo 5 and involves a Covenant splinter group called the Banished, as they try to take control of an installation that makes Halo rings. There’s lots of expensive-looking cut scenes but we can’t pretend we found ourselves particularly gripped by the typically dour characters and storyline. Especially as they stood in such contrast to the fast-paced and exciting action.
Maybe it’s just because we haven’t played this sort of thing in a while but with all the different commanders to choose from, each with their own special abilities (from a healing ray to a rocket attack) we couldn’t help imagining a more light-hearted game with Overwatch style characters and presentation. It seems sacrilegious even to us, but Halo Wars 2 is essentially proof that our beloved Advance Wars would make a great RTS.
We’re sure the game would never have got made without the Halo name attached, but we’re surprised to find, when talking to creative director Alistair Hope, that he looks at it as being a RTS for people unfamiliar with Halo – rather than the other way around. ‘From Creative Assembly’s point of view we’ve been thinking about strategy games and console for quite a while, and we want to figure out new ways to get people to play strategy games.’


Hope last worked on Alien Isolation, with half the Halo Wars 2 team also hailing from that game and the other half from Total War (we asked him about rumours of a sequel or VR version of Isolation, but he wouldn’t comment). ‘Our ambition for those that play the game was for them to turn around and say, “I enjoyed that, I didn’t realise I liked strategy games”’.
That’s a common sentiment for those who play XCOM, but that’s a turn-based strategy where you can take as long as you like between giving your orders. In a real-time strategy the action is going on all the time, and you have to react instantly. But that’s why they became so popular back in the day, as you play it essentially like an action game – just where you’re controlling an army instead of a lone wolf soldier.
Base-building is still an important element in Halo Wars 2, where you have to create buildings such as barracks and garages to manufacture new units – but it’s as streamlined as possible. There are two resources to collect but these are auto-generated by dedicated buildings or can be collected by your soldiers as they explore. There’s also numerous upgrades and power-ups you can research, from giving vehicles little flying drones as company or granting your Spartan hero character the ability to jump onto an enemy unit and hijack it. 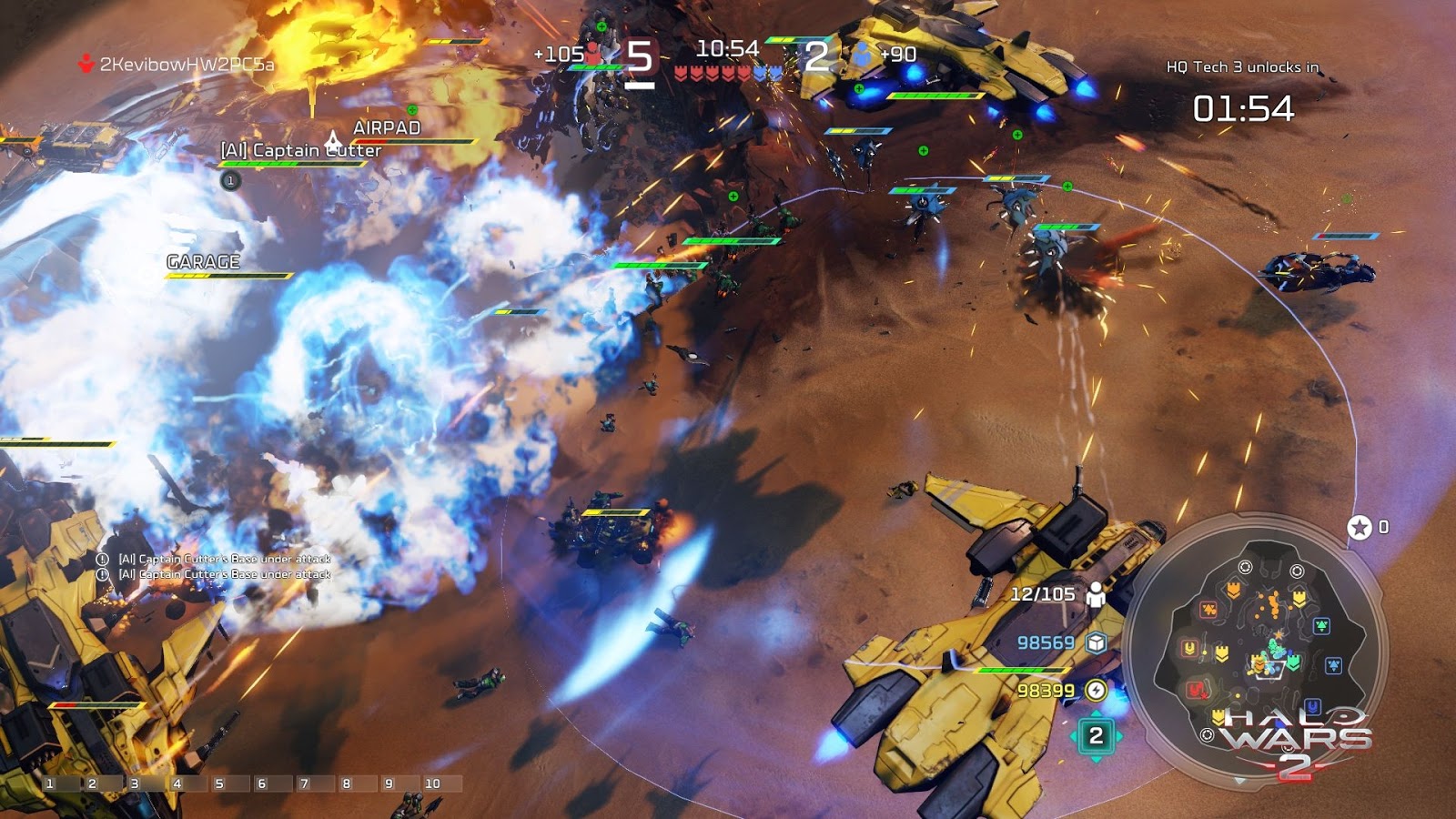 The story mission we played clearly still had one foot in tutorial territory but it was very enjoyable nevertheless, and as well as capturing a set of Forerunner artefacts there’s also a suite of bonus objects, including blowing up an enemy base, that rewards exploring the whole map. ‘We didn’t want to just reproduce the original, and the mechanics of the original’, says Hope. ‘We wanted to evolve things, make it a little more contemporary and introduce new features.’
As we point out though, it’s hard to know what contemporary means with a genre that has barely any representation on modern formats. The obvious answer though is through multiplayer, and as such the whole campaign can be played in co-op with another player. But in terms of competitive play there’s also a new mode call Blitz which has no base-building, tiny maps, and… microtransactions.
We were highly dubious of all three aspects before playing it, but in the end we have to admit that it’s actually a highly enjoyable new concept. In order to deploy new units you create a deck of cards (or choose a preselected one) before a match, each of which describes a unit or special ability and the amount of energy required to manifest it.
You acquire energy by destroying other enemy units or collecting special drop pods, but your main objectives is capturing and holding three control points – just like Battlefield’s Conquest mode. We were playing in 3 vs. 3 matches and while it’s common at preview events to never really talk to other team-mates we quickly found ourselves colluding with our allies and barking out advice as to who was to hold what point and where the enemy seemed to be making for.

As you’ve probably guessed the microtransactions come into it because you can not only earn more cards in-game, but also buy them with real money if you want (albeit it from randomly generated loot boxes). Obviously that means the richer you are the more likely you are to own a better card, although Hope tries to counter this with the idea that that doesn’t mean you have the skill to make the most of them. Although clearly you can only go so wrong when you’re spawning giant Scarab walkers instead of a weedy little warthog.
There are other more traditional multiplayer modes as well though, that have no microtransactions. Including one called Stronghold which has no resources to worry about. This is a halfway house between Blitz and the other modes Domination and Deathmatch, and was the initial mode shown off at E3. Getting stuck into the other modes, where you’re encouraged to set-up multiple bases and wield huge armies, was great fun though, and we don’t think we’re saying that just because we won.
We certainly didn’t win all the Blitz games though, and yet we enjoyed everything we played of Halo Wars 2. And unlike some preview events we were genuinely upset when the time was up and we had to stop playing. Whether the game can overcome the fact that most console gamers will still think strategy games aren’t for them probably depends more on Microsoft’s marketing than anything else. But if you ignore the labels this already seems set to be one of the most exciting and action-packed multiplayer games of the year.