Hao ji le (Have a Nice Day) is the first Chinese animated feature selected to screen in competition at the Berlin Film Festival. The festival’s 67th edition starts later this week

The 75-minute hand-drawn film is directed by Liu Jian, who produced one of China’s first indie animated features, Piercing I (Citong wo), back in 2010.

Jian’s own company, Le-joy Animation Studio, produced the film in partnership with Nezha Bros. Pictures. Have A Nice Day will have its gala screening in Berlin on Friday, February 17, followed by four additional screenings. 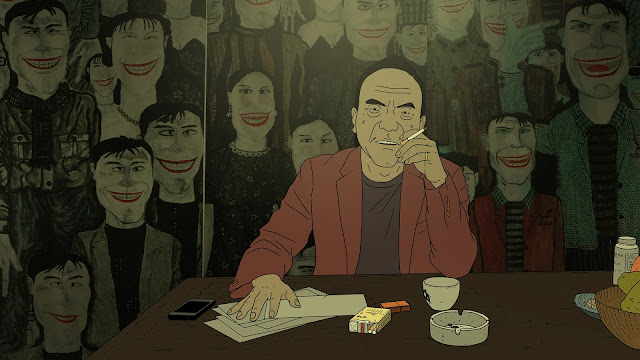 Here is the description of the film from the Berlinale organizers:

A city in southern China and a bag containing a million yuan draws several people from diverse backgrounds with different personal motives into a bloody conflict. Philosophizing gangster bosses, aging hitmen, men and women who are tired of the struggle to survive—anyone who happens to have the bag holds on to it tightly, as if it were a lifeline. Hao ji le is a black comedy; the film’s inscrutable, laconic humor holds up a magnifying glass to attitudes to life and social conditions. Humankind’s constant greed meets a deeply insecure country in transition. The reduced realism of the film’s animated tableau heightens and stylizes the mood in today’s China, caught between stasis and a new beginning. The protagonists of this macabre dance wander, strangely lost, through precisely drawn but radically changing cityscapes. The signs and symbols of capitalism impose themselves everywhere, but most people are excluded from the life these signs promise. And Mao Zedong’s image still graces the banknotes.