Squeeze Partners with Viacom18 to Bring ‘Cracké’ to India

CG-animated comedy series from Canadian production company Squeeze is set to debut on Nickelodeon India and stream on VOOT Kids.

QUÉBEC, Canada -- In an exclusive partnership with Squeeze, leading Indian entertainment conglomerate Viacom18 is set to premiere the super-hit TV series Cracké in India. Produced by Squeeze, the riotous family animation series will be broadcast on the preeminent kid’s entertainment channel, Nickelodeon, and stream on the leading OTT platform, VOOT Kids. The partnership with Viacom18 takes the number of countries and territories welcoming Cracké’s paranoid Papa Ed and his runaway eggs to 185. 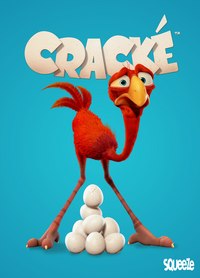 Speaking about the partnership, Nina Elavia Jaipuria, Head, Kids Entertainment at Viacom18 said, “We are happy to bring alive Cracké to our viewers in India. Kids in India love comedy and Cracké, with its short duration format, unique animation style and adorable characterization, is sure to provide them with an immersive experience.”

“VOOT kids has always endeavored to cater to the discerning needs of parents seeking engaging content that can keep the kids entertained,” said Gauray Gandhi, COO – Viacom18 Digital Venture. “Bit-size fun for the on-the-go viewers being brought alive by Cracké is sure to provide a very enthralling experience with our viewers.”

“It’s a great honor for us to partner with a major broadcaster such as Viacom,” said Denis Doré, Squeeze’s President and Co-Founder. “It’s very rewarding to realize that Cracké will make kids laugh around the world on a renowned and leading TV network such as Nickelodeon.”

Created and produced by Squeeze in Québec City, Canada, Cracké is a universal comedy series starring Ed, an anxious ostrich dad, and his beloved brood. With the good intention to protect his eight eggs, Ed will cause trouble and threats, never missing an opportunity to make things worse for himself. In Canada, the 52 one-minute episodes are broadcast by Teletoon. The original property also comes to life through a mobile video game and an innovative comic book application - only available in Canada for now.

Cracké was produced in Canada in collaboration with Teletoon, the Canada Media Fund, the Quebec Refundable Tax Credit for Film and Television Production (managed by SODEC), the Canadian Film or Video Production Tax Credit (CPTC) – CAVCO, the Bell Fund, and the National Bank. Cracké’s growth and commercialization plan is made possible with the financial support of Québec City’s economic development strategy.