Warner Bros. Reboots Snagglepuss As A Gay Playwright Being Hunted By The U.S. Government

Heavens to Murgatroyd! Warner Bros., which owns the entire Hanna-Barbera libary, is rebooting the late-1950s character Snagglepuss as “a gay Southern Gothic playwright.”

The eight-page story will debut this March in the Suicide Squad/Banana Splits Annual #1, before turning into a regular DC series this fall. “I envision him like a tragic Tennessee Williams figure,” writer Marc Russell told HiLoBrow.com. “Huckleberry Hound is sort of a William Faulkner guy, they’re in New York in the 1950s, Marlon Brando shows up, Dorothy Parker, these socialites of New York from that era come and go.”

The sexual orientation was never affirmed in the Hanna-Barbera cartoons, but Russell, who has also done an updated take on The Flintstones for DC Comics, is making Snagglepuss’ sexuality a key part of the story, in which the pink mountain lion is dragged before the Communist-hunting House Un-American Activities Committee (HUAC). He’s accused of being a pinko, get it?

“It’s obviously ignored in the cartoons ’cuz they were made at a time when you couldn’t even acknowledge the existence of such a thing, but it’s still so obvious,” Russell said. “So it’s natural to present it in a context where everybody knows, but it’s still closeted. And dealing with the cultural scene of the 1950s, especially on Broadway, where everybody’s gay, or is working with someone who’s gay, but nobody can talk about it — and what it’s like to have to try to create culture out of silence.”

Here’s a page from the comic, with artwork of Snagglepuss and Augie Doggie by Howard Porter. Steve Buccellato is the colorist and Dave Sharpe does lettering. 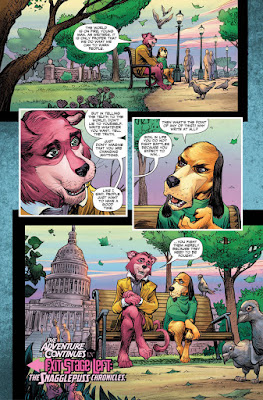