Here’s one for the history books: the first movie that Donald Trump screened during his term in the White House was Disney/Pixar’s Finding Dory. He held the screenings as mass protests raged around the United States (and in front of the White House) in opposition of Trump’s travel ban against refugees and citizens of certain Muslim-majority countries.

The Disney Company Needs To Get Out of Trump’s Bed

This afternoon I wrote a series of tweets about the uncomfortable and potentially brand-damaging relationship that Disney CEO Bob Iger (pictured above, left) is pursuing with U.S. president Donald Trump, a relationship that puts financial aims above the welfare of Disney employees and the carefully polished cultural brand of the Walt Disney Company.

“It was horrifying to see that members of our society were being persecuted, very obviously because of what they looked like,” Zootopia co-director Rich Moore recently told the L.A. Times about black men who are targeted by American law enforcement. “I remember saying, ‘This is exactly what we’re talking about with this movie.’ It was emboldening.”

Comments like those by Moore ring hollow, however, when Disney’s CEO is collaborating with the country’s highest elected official, a president who is recklessly targeting and endangering large segments of Disney’s workforce and audience. Iger’s refusal to spell out Disney’s corporate and social values before engaging with Trump are deeply troubling.

Thus far, the only comments Iger has made on Trump have placed corporate profit over people. Shortly after the election, Iger said that he was “hopeful” about Trump because, “There is going to be far more energy around attacking the tax code, changing the tax code, closing loopholes on corporate taxes and lowering the base.”

Watch the First Trailer for ‘Tangled: The Series’

The first trailer for Disney’s Tangled tv series, announced back in 2015, has finally arrived.

The show will launch in March on Disney Channel with a made-for-tv movie, Tangled: Before Ever After, before heading into its regular half-hour series format. It was developed by veteran animator Chris Sonnenburg, whose credits include Gravity Falls and Futurama, and Shane Prigmore, a character designer on The Boxtrolls, Foster’s Home for Imaginary Friends, and Mr. Peabody & Sherman. Sonnenburg did double duty as exec producer and supervising director, while Prigmore was exec producer and creative director.

The events of the show take place between the 2010 theatrical feature and the 2012 short Tangled Ever After, which centered on the wedding of Rapunzel and Flynn Rider. In the series though, Rapunzel puts that marriage, and her ascension to the crown, on hold so the couple can continue adventuring with chameleon sidekick Pascal and steed Maximus. New characters include Cassandra, a “tough-as-nails handmaiden who becomes Rapunzel’s confidant.” 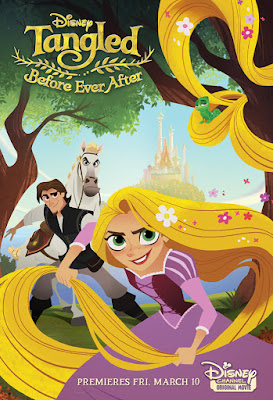 Disney Channel has dated the small-screen debut of the all-new animated movie and TV series set in the world of Walt Disney Animation Studios’ Tangled. Taking place between the story events of the original feature and the short Tangled Ever After, the Disney Channel Original Movie Tangled Before Ever After debuts Friday, March 10 at 8 p.m. ET, leading into the premiere of Tangled: The Series on Friday, March 24 at 7:30 p.m. ET

The new Tangled tales feature stars Mandy Moore and Zachary Levi reprising their roles as Rapunzel and Eugene — the charmer formerly known as Flynn Rider. Both the movie and series will have same-day launches on Disney Channel VOD platforms, and will roll out worldwide in 162 countries following their US debut.

Rapunzel & Co. will also appear in new print and e-book titles (including original middle grade series by Leila Howland) from Disney Publishing; Disney Consumer Products and Interactive Media will debut new playsets, dolls, role-play, apparel and accessories later this Fall at Disney Store and all other retailers; the singles “Wind in My Hair” performed by Mandy Moore and “Life After Happily Ever After” performed by Moore, Zachary Levi and Clancy Brown releasing on February 10 and March 10, respectively, from Walt Disney Records, and a DVD of the TV movie and four animated shorts releasing April 11 by Disney Studios.

The vibrant, energetic new adventure-comedy animation projects unfold as Rapunzel gets to know her parents, kingdom, and the people of Corona. With her irrepressible spirit and natural curiosity, she realizes there is a lot to learn about the world and herself before she can assume her role as Princess. Along for the ride are beloved Tangled characters including loyal chameleon Pascal, no-nonsense horse Maximus, and the Snuggly Duckling Pub Thugs.

In Tangled Before Ever After, Rapunzel grapples with the responsibilities of being a princess and the overprotective ways of her father. While she wholeheartedly loves Eugene, Rapunzel does not share his immediate desire to get married and settle down within the castle walls. Determined to live life on her own terms, she and her tough-as-nails Lady-in-Waiting Cassandra (voiced by Broadway’s Eden Espinosa) embark on a secret adventure where they encounter mystical rocks that magically cause Rapunzel’s long blonde hair to grow back. Impossible to break and difficult to hide, Rapunzel must learn to embrace her hair and all that it represents.