Sterling Pixels is a quality focused artist-driven 3d animation studio, provides e-learning solutions tailored to customers’ needs around the world. A strong technology, animation and analytical tools driven Education Company which enhances the learning experience of a student.1. Lighting Artist  (Immediate) Experience: Min. 2 yrs
Software Required:-  Autodesk Maya, Mental Ray.
Job Description:- Ensure there is consistency in lighting, color balance and mood between the various elements of a shot or scene. Need to work closely with the rendering and compositing  departments to understand what is required at the next stage and ensure their material is easy to use and delivered on time. Must have knowledge of passes and there utilization.


Interested candidates can share there profile at:- mail@pixelsed.com with the showreel. Without showreel the profile will be rejected. 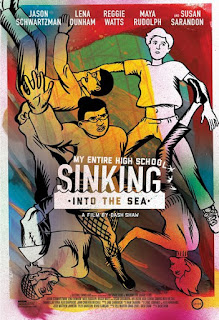 NEW YORK -- Independent animation distributor GKIDS has unveiled a brand-new trailer for the forthcoming North American release of animated feature My Entire High School Sinking Into the Sea. The 2016 American independent comedy was written and directed by Dash Shaw, celebrated author of such graphic novels as New School, Bottomless Belly Button and the recently-released Cosplayers, in his feature film debut.

Following a strong audience and critical response at the Toronto International Film Festival, New York Film Festival, AFI Fest and Fantastic Fest, among others, the will be released in select theaters on April 14th.

Here’s the official synopsis, and check out the new trailer in the player below:

From acclaimed graphic novelist Dash Shaw (New School) comes an audacious debut that is equal parts disaster cinema, high school comedy and blockbuster satire, told through a dream-like mixed media animation style that incorporates drawings, paintings and collage. Dash (Jason Schwartzman) and his best friend Assaf (Reggie Watts) are preparing for another year at Tides High School muckraking on behalf of their widely-distributed but little-read school newspaper, edited by their friend Verti (Maya Rudolph). But just when a blossoming relationship between Assaf and Verti threatens to destroy the boys’ friendship, Dash learns of the administration’s cover-up that puts all the students in danger. As disaster erupts and the friends race to escape through the roof of the school, they are joined by a popular know-it-all (Lena Dunham) and a lunch lady (Susan Sarandon) who is much more than meets the eye. But even as the film piles on brilliant details like a post-apocalyptic cult formed by jocks, video game homages, and an infectious synth soundtrack, it never loses sight of the characters at the heart of the story. Hailed as “the most original animated film of the year” and “John Hughes for the Adult Swim generation” (Indiewire), the film’s everyday concerns of friendships, cliques and young love remind us how the high school experience continues to shape who we become, even in the most unusual of circumstances.